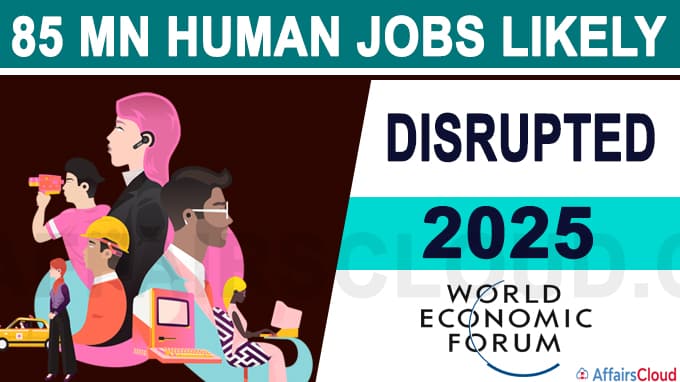 According to the Third Edition of “The Future of Jobs Report 2020” released by the World Economic Forum (WEF), COVID-19 and Technological Advances will disrupt around 85 Million Jobs by 2025.

The WEF report is based on the Future of Jobs Survey, which is based on projections of senior Business Leaders from 300 Global firms who together employ over a million workers.

i.In the next five years, automation and new division of labour between humans and machines will create disruption of jobs.

ii.Redundant work roles will decline from 15.4 percent of the workforce to 9 per cent.

iv.The report also points out that

v.The report also highlights that 50 percent of the workers require re-skilling to remain in their jobs for the next five years.

i.The report found that 97 Million New Jobs may emerge in the New Labour Market consisting of division of labour between humans, machines and algorithms.

ii.The acceleration of technology is set to increase the Global Inequality, and low-income workers, young people, women and low-skilled workers will be most affected.

ii.It urged the private sector to set benchmarks, training programmes and targets to ensure that workers are not left behind.

i.WEF released a white paper on ‘20 markets of tomorrow’ which will transform the Economies in an inclusive and sustainable way during the Jobs Reset Summit 2020.

India named among countries with Solid Technological Systems for a transformation:

i.India has been named among the countries that present solid technological systems for such a transformation.

ii.However, India needs development in social and institutional fabric to deliver in these markets.

iii.Czech Republic, Israel, Italy, Japan, Spain, Hungary, Poland and BRIC countries (Brazil, Russia, India and China) have been named among the countries with the potential for such transformations.