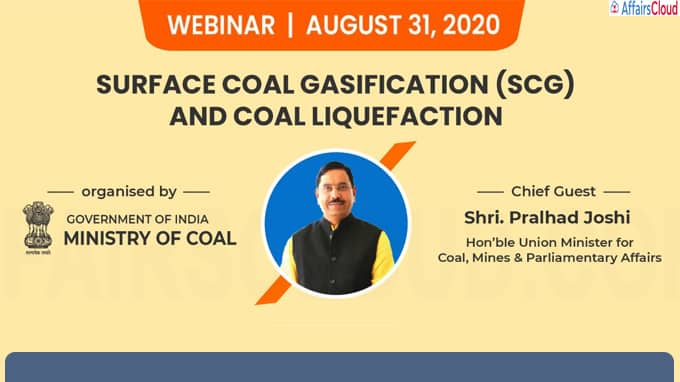 On August 31, 2020, webinar on Coal Gasification and Liquefaction was organized by Ministry of Coal and Mines which was addressed by Union Minister of Coal and Mines Pralhad Joshi along with Anil Kumar Jain, Secretary, Coal and Dr Vijay Kumar (VK) Saraswat, Member NITI (National Institution for Transforming India) Aayog. The objective behind this webinar was to discuss the road map for achieving the 100 million tonnes (MT) coal gasification target by 2030 with investments worth over Rs4 lakh crores.

-In order to boost production of synthetic natural gas, energy fuel, urea for fertilisers and production of other chemicals, the central government has provided for a concession of 20 per cent on revenue share of coal used for gasification. This will also encourage the clean sources of fuel

-CIL has also planned to set up at least three gasification plants (besides Dankuni) on Build Own Operate basis through global tendering and has signed an agreement with GAIL (formerly known as Gas Authority of India Ltd.) for marketing synthetic natural gas.

On the lines of the announcement made by the Central government under the 20 Lakh crore Aatma Nirbhar Bharat Abhiyan, on June 18, 2020, Prime Minister Narendra Modi launched the two stage electronic auction of 41 coal blocks for commercial mining through video-conference. The process of this e-auction was initiated by the Ministry of Coal in association with Federation of Indian Chambers of Commerce & Industry (FICCI) as an industry partner under the provisions of Coal Mines (Special Provisions) Act 2015 and Mines and Minerals (Development and Regulation) Act 1957.