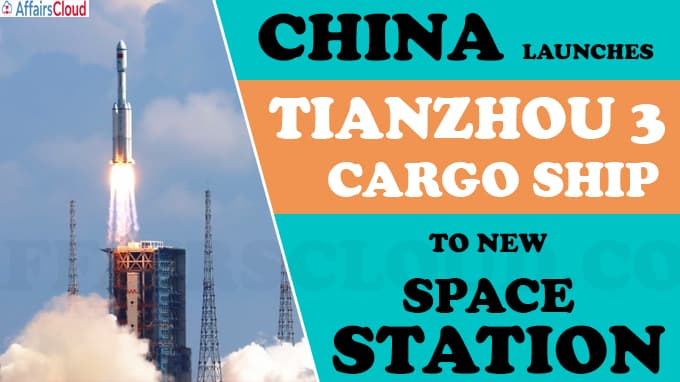 i.Tianzhou-3 was successfully docked with the core Tianhe module of the space station.

ii.China plans to launch two additional core modules for the space station- Wentian and Mengtian on the Long March 5B rockets.

iii.The space station once completed, will give competition to ISS (International Space Station), which was constructed by the United States (US), Russia, and Japan.

i.Tianhe or Heavenly Harmony is the third and largest space station launched by China on April 29, 2021, to operate in the Low Earth Orbit (LEO) at an altitude of 340-450km above Earth’s surface for more than 10 years.

Why Astronauts will be sent?

The Space Crew will be sent to the station to practice spacewalks and conduct repairs, maintenance and conduct scientific operations.

i.It is a Chinese automated cargo spacecraft that was developed by China’s first space station Tiangong-1. It is used to resupply modular space stations. Spacecraft was launched on the Long March 7 rocket from Wenchang in 2017. This was the first version of the spacecraft and has a mass of 12,910 kg.

ii.Tianzhou-2: This spacecraft was lifted-off from China carrying 6.8 tons of cargo such as space suits, food and equipment for astronauts and fuel for the station.

Further China plans to carry out more space launches for the building of space station in 2021 such as the manned flight on a Shenzhou-13 spacecraft via a Long March-2F rocket from Jiuquan centre.