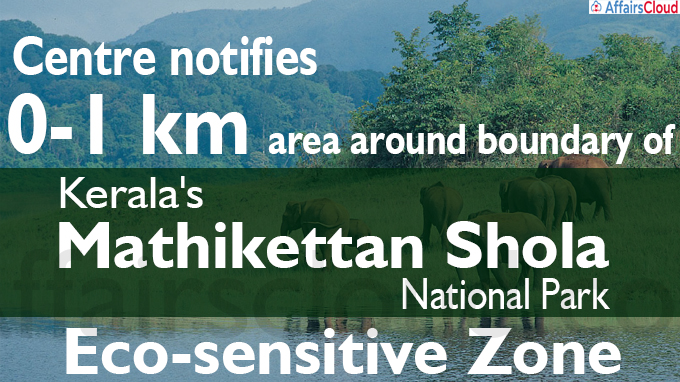 On January 1, 2021 The central government notified a zero to 1 km area around the boundary of Mathikettan Shola National Park in Idukki district, Kerala as an Eco-sensitive zone. The area of the Eco-sensitive Zone is 17.5 square kilometres. The notification was issued by the Union Ministry of Environment, Forest and Climate Change.

To conserve the uniqueness of Shola forest in Mathikettan and its importance as an elephant corridor.

Highlights of the Notification

i.All the new and existing mining (minor and major minerals), stone quarrying and crushing units will be prohibited immediately, except to meet the local needs of people, including digging the earth to build or repair houses within the eco-sensitive zone.

ii.New industries and expanding the existing industries that cause pollution in the zone will be banned.

iii.According to the classification of Industries in the guidelines issued by the Central Pollution Control Board in February, 2016, the non-polluting industries are allowed within the Eco-sensitive Zone

iv.No new  commercial hotels and resorts will be permitted within the protected area or upto the extent of the Eco-sensitive Zone, whichever is nearer. The small temporary structures for eco-tourism activities are exempted from this ban.

v.New commercial construction of any kind citing the same condition is also banned.

It is situated in the high ranges of southern Western Ghats and formed together with the part of the forest areas of Cardamom Hill Reserve.

i.It is a home to many endemic flora and fauna and the  habitat is the last remains of the original forests of the Cardamom Hill Reserve.

ii.In addition to them, it is also a home to many kinds of mammalian species like Indian giant squirrel, Nilgiri langur, lion-tailed macaque, etc.,

It provides water supply from Uchinikuthipuzha, Mathikettan Puzha and Njandar, the tributaries of Panniyar to meet the agricultural and drinking water requirements of Santhanpara and Poopara areas of Idukki district.

It is also a biodiversity hotspot with its rich treasure of medicinal herbs.

On 17th July 2020, in the review meeting of “Char Dham Road Project” over a virtual platform, Prakash Javadekar, the Union Minister of Environment, Forest and Climate Change(MoEF&CC) informed the approval of the Zonal Master Plan (ZMP) of Bhagirathi Eco-Sensitive Zone by the Ministry Environment, Forest and Climate Change(MoEF&CC) on 16th July 2020.