On March 06, 2020, In exercise of the powers conferred by section 3 of the Delimitation Act, 2002, the Central government has set up a Delimitation Commission , headed by former Supreme Court judge Ranjana Prakash Desai, for the delimitation of Assembly and Parliamentary constituencies of the Union Territory of Jammu and Kashmir (J&K) and the northeastern states of Assam, Arunachal Pradesh(AP), Manipur and Nagaland. 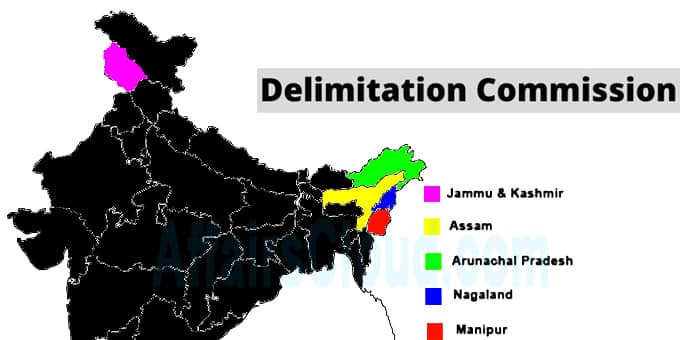 The Section 60 of the J&K Reorganisation Act,2019 stipulates that the number of seats in its Legislative Assembly will be increased to 114, from the present 107. Of these, 24 seats have been reserved for Pakistan Occupied Kashmir.

Delimitation Commission:
It is appointed by the President of India (presently Ram Nath Kovind) and works in collaboration with the Election Commission of India.

What is Delimitation?
It refers to the act or process of fixing limits or boundaries of territorial constituencies in a country to represent changes in population.

Why it is needed?
The primary aim of delimitation is to provide equal representation to similar segments of the population. It also aims at proper division of geographical areas so that one political party does not get an inappropriate advantage over others in elections.

It also aimed to follow the principle of One vote One value.

Issues with Delimitation:
The States that take less interest in population control could end up with a greater number of seats in Parliament.