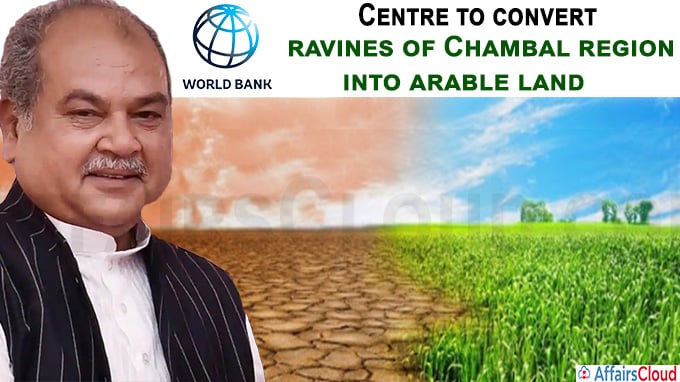 On 26th July 2020, Narendra Singh Tomar, Union Minister of Agriculture and Farmers Welfare announced that the Central Government in collaboration with the World Bank has decided to convert the area of ravines in the region of Gwalior-Chambal belt of Madhya Pradesh into cultivable land.

The decision was made through a virtual meeting with Adarsh Kumar, representative of the World Bank.

i.A preliminary report for the conversion of ravines into arable land will be prepared in a month.

ii.Following the initial reports, the further actions will be discussed with the Chief Minister of Madhya Pradesh in the subsequent meetings.

iii.The aspects related to the technology, infrastructure, capital cost, investment and other will be considered before the initiation of the project with minimum budget allocation.

i.Around 3 lakh hectares land of this region are non-cultivable, this conversion will improve and support the integrated development of the Bihad area in the region of Gwalior-Chambal.

ii.In addition to the agricultural and environmental development this project will also create employment opportunities and will support the substantive development of this region.

i.The board of executives of the World Bank (WB) has approved loan of $ 500 million (about Rs 3,700 crore) under ‘Strengthening Teaching-Learning and Results for States Program (STARS)’project to improve the quality and governance of school education across six states (Himachal Pradesh, Kerala, Madhya Pradesh, Maharashtra, Odisha, and Rajasthan) in India.