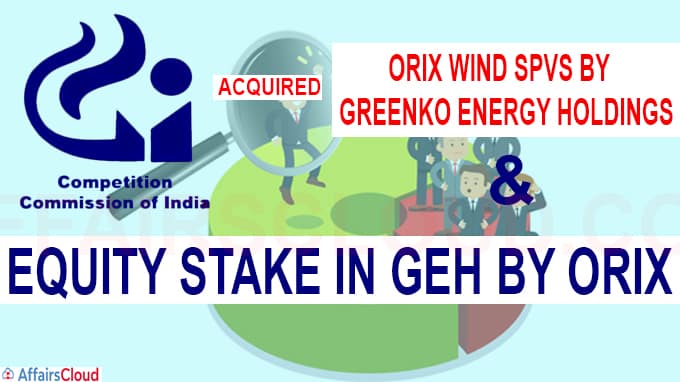 On November 12, 2020 The Competition Commission of India (CCI) approved the following acquisitions under Section 31(1) of the Competition Act, 2002.

Approval for acquisition between Orix and GEH

ii.It is to be noted that the new holding company is still not incorporated and accordingly has no business activity.

Key Info about the Companies:

ii.The act forbids the anti-competitive agreements, abuse of dominant position by enterprises and regulates combinations (acquisition, acquiring of control and M&A- Merger and Acquisition), that may or may not have a significant adverse effect on competition within India

On September 29, 2020 The Competition Commission of India (CCI) under Section 31(1) of the Competition Act, 2002 has approved the acquisition of certain real estate projects of RMZ Group and 100% equity shareholding in CoWrks India Pvt Ltd. by Brookfield Private Capital (DIFC-Dubai International Financial Centre) Limited.