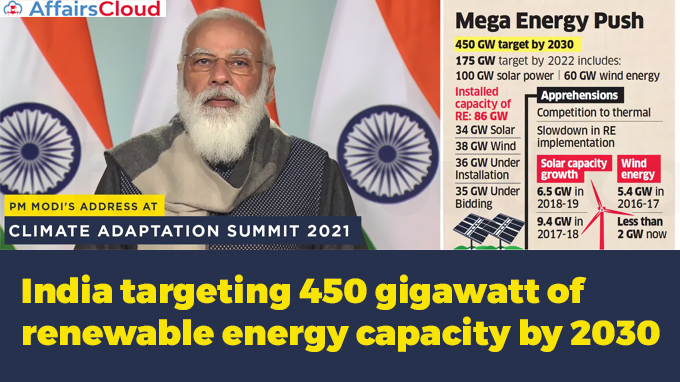 On January 25, 2021, the Government of Netherlands hosted a virtual international Climate Adaptation Summit (CAS Online) 2021 with a support of Global Center on Adaptation (GCA) from Amsterdam, Netherlands. From India, the summit was addressed by Prime Minister (PM) Narendra Modi.

From India, the summit was addressed by Prime Minister (PM) Narendra Modi.

–India is targeting 450 Gigawatt (GW) of renewable energy capacity by the year 2030.

–LED lights are being promoted, which saves 38 million tons of carbondioxide emissions annually.

–India is also on the way to restore 26 million hectares of degraded land by 2030.

–64 million households are being connected to piped water supply.

–PM called upon the Global Commission on Adaptation to work with CDRI to enhance infrastructure resilience globally.

It is an online global conference to accelerate, innovate and scale up the world’s efforts in adapting sustainable climate change for the future.

–The UNFCCC’s COP26 (United Nations Climate Change Conference- Conference of the Parties 26) will be held in Glasgow, Scotland in 2021.

–The Third International Conference on Disaster Resilient Infrastructure will be held in India.

i.India’s most vulnerable channel for annual tax loss is taxes lost to other countries i.e. outward foreign direct investments (OFDI) with a 66% vulnerability score. The trading partners of India which contribute most to this factor are Mauritius (23.6%), Singapore (17.2%), and the Netherlands (11.2%).

ii.Delhi-Mumbai expressway will have India’s first five animal overpass or “animal bridges” with a combined length of over 2.5 km for safe passage of wildlife. These bridges are inspired from the Wildlife crossings in the Netherlands.