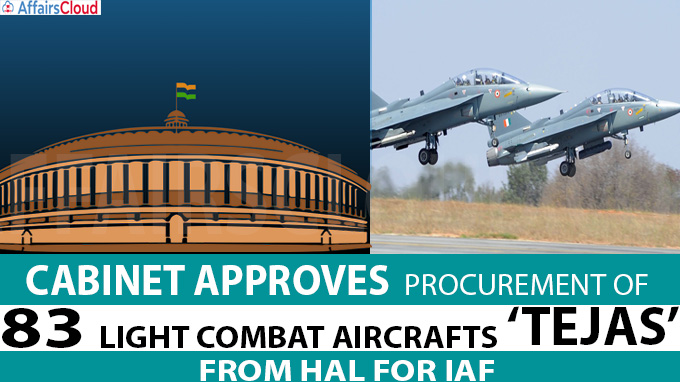 On January 13, 2021, as a part of Atmanirbhar programme, the Cabinet Committee on Security (CCS) under the Chairmanship of Prime Minister (PM) Narendra Modi approved the procurement of 83 Light Combat Aircraft (LCA) Tejas at the cost of Rs. 45,696 Crore for Indian Air Force (IAF). These include 73 LCA Tejas Mk-1A fighter aircrafts and 10 LCA Tejas Mk-1 Trainer aircrafts.

It will be an indigenously designed, developed and manufactured state-of-the-art modern 4+ generation fighter aircraft.

Design and Development of Infrastructure sanctions for IAF:

The CCS has also approved Rs.1,202 Crore Design and Development of Infrastructure sanctions for IAF to enable them handle repairs or servicing at their base depot in order to reduce turnaround time.

Target – IAF and HAL is likely to signed by March, 2021 on the mega deal and actual delivery of the aircraft are expected from 2024.

–The above mentioned deal for the 83 Mk-1A jets will take the total number of Tejas variants ordered to 123.

–About 500 Indian companies in the design and manufacturing sectors will work with HAL in this procurement.

–Government has been majorly focusing on boosting domestic defence production and set a target of Rs 1.75 lakh crore (USD 25 billion) turnover in defence manufacturing by 2025.

–Indian armed forces are projected to spend around USD 130 billion in capital procurement in the next five years.

The Union Cabinet chaired by PM Narendra Modi approved a memorandum of understanding (MoU) on scientific and technical cooperation between the Ministry of Earth Sciences (MoES) and the National Centre of Meteorology (NCM) of the United Arab Emirates (UAE).

–This MoU is on the lines of the scientific activities being carried out by the respective Institutes in India and NCM-UAE during the UAE delegation visit at MoES on November 8, 2019.

i.On November 3, 2020 India hosted the 8th Meeting of the India-UAE High Level Joint Task Force on Investments(the Joint Task Force) virtually due to the ongoing COVID-19 pandemic. The meeting was co- chaired by Piyush Goyal, Union Minister of Railways, and His Highness Sheikh Hamed bin Zayed Al Nahyan, Member of the Executive Council of the Emirate of Abu Dhabi.

ii.Ratan Tata was conferred with “Global Visionary of Sustainable Business and Peace” by The Indo-Israel Chambers Of Commerce during a virtual ceremony between the UAE, India and Israel.