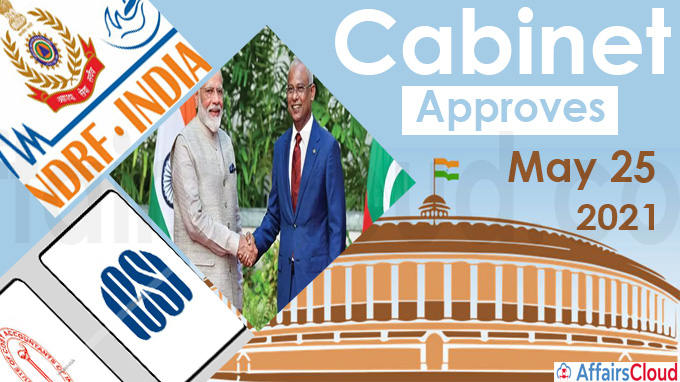 i.ICoAI & ICSI have entered into agreements with

i.ICoAI is a Statutory professional body for the regulation of the profession of Cost Accountancy.

ii.ICSI is a statutory body established to regulate the profession of Company Secretaries in India.

Creation of the post of Director at NDRF Academy, Nagpur

The cabinet has approved the proposal of the Ministry of Home Affairs for creation of One post of Director in Senior Administrative Grade (SAG), at NDRF Academy in Nagpur, Maharashtra.

The cabinet has approved the opening of a new Consulate General of India in Addu City, Maldives in 2021. It is India’s 1st Consulate in Maldives and will help in building India’s diplomatic presence in Maldives.

About Institute of Cost Accountants of India  (ICoAI)

About  Institute of Company Secretaries of India (ICSI)