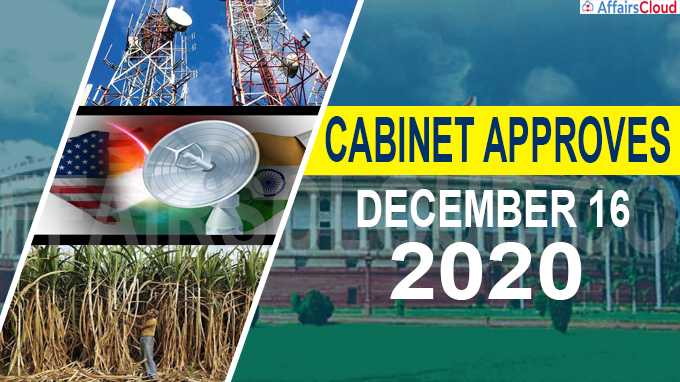 The Union Cabinet has approved the proposal of the Department of Telecommunications (DoT), Ministry of Communications to conduct spectrum auction worth Rs. 3,92,332.70 crore (at reserve price) to offer a total of 2251.25 MHz (Megahertz) to successful bidders for providing commercial mobile services.

Bidders will have to adhere to conditions like block size, spectrum cap i.e. the maximum amount of spectrum that can be held by each bidder after the completion of the auction, roll-out obligations, payment terms etc.

Successful bidders may pay the entire bid in lump sum or may pay partial amount and the remaining amount in a maximum up to 16 equated annual instalments, after a moratorium of two years.

What is Spectrum allocation?

Spectrum allocation or Frequency allocation is the allocation and regulation of the electromagnetic spectrum into radio frequency bands done by governments.

In May 2020, The Digital Communications Commission, the apex decision making body of the Department of Telecom, in May had approved the spectrum auction plan worth Rs 5.22 lakh crore which included radiowaves for 5G services as well. However it decided not to auction frequencies in 3,300-3,600 Mhz bands that were identified for 5G services.

Objective of scheme: Centre’s commitment towards economic development of the NER by strengthening the Intra-State Transmission and Distribution Infrastructure for efficient operation of the electricity sector.

NERPSIP is a scheme of the Ministry of Power which is funded by the World Bank (WB) and Government of India (GoI) on a 50:50 basis.

CCEA also approved an assistance of Rs 3,500 crore for sugarcane farmers or Ganna Kisan that will be directly credited into farmers’ accounts on behalf of sugar mills against cane price dues and subsequent balance.

Reason behind the Assistance:

Farmers sell their sugarcane to the sugar mills but not getting their dues from the latter due to surplus sugar stock. The stock is estimated at 310 lakh tonnes against an annual demand of 260 lakh tones. Therefore GoI is facilitating the evacuation of surplus sugar stock to enable payment of dues of the sugarcane farmers.

–Identify energy-related issues and develop topics and possible agendas for the exchange of information and regulatory practices in areas of mutual interest;

–Organize visits at each other’s facilities for seminars, and exchanges;

–Exchange of personnel (management or technical)

In order to enhance national security, the Cabinet Committee on Security (CCS) headed by PM Narendra Modi has accorded approval for the National Security Directive on Telecommunication sector. The policy will come into effect after 180 days from the date of approval.

–The procedure to designate trusted products will be devised by the designated authority, namely National Cyber Security Coordinator (NCSC).

–Further, the designated authority will make its determination based on approval of a committee, to be called, National Security Committee on Telecom, headed by the Deputy NSA (National Security Advisor).

Reasons behind this Approval:

India is among the top three countries in the world facing cyber-attacks and a sum of Rs 1.24 lakh crores was lost due to cyber-crime in 2019. Recent ransomware attacks, as well as data and identity thefts, are a serious cause for concern from a national security angle. Therefore, telecom service providers are required to connect new devices which are designated trusted products.

i.Union cabinet has approved the signing of MoU between Ministry of Communications, India and the Department of Digital, Culture, Media and Sports (DCMS) of the UK Government for co-operation in telecommunications.

ii.As a part of the Aatmanirbhar Bharat 3.0 package, the Union Cabinet has approved the infusion of Rs 6,000 crore equity in National Investment and Infrastructure Fund’s (NIIF’s) Debt Financing platform in the next two years i.e., 2020-21 and 2021-22. This financial aid will help the entity to raise Rs 1.10 lakh crore by 2025 for financing infrastructure development projects in the country.