On December 6, 2018, the Union Cabinet chaired by Prime Minister Shri Narendra Modi has approved the following: 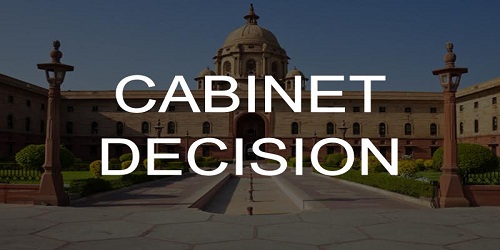 Cabinet approved Agriculture Export Policy, 2018 to double agri exports
On December 6, 2018, the Union Cabinet chaired by Prime Minister Shri Narendra Modi approved the Agriculture Export Policy, 2018.
Objective:
To double the agricultural exports and integrate Indian farmers and agricultural products with the global value chains.
Key Points:
i. It would focus on the following:

iv. The Operational recommendations include:

Cabinet approved implementation of Shahpurkandi Dam (National Project) on river Ravi in Punjab with central assistance of Rs.485.38 crore
On December 6, 2018, the Union Cabinet chaired by Prime Minister Shri Narendra Modi approved implementation of Shahpurkandi Dam Project, Punjab on river Ravi.
i. For this, central Assistance of Rs. 485.38 cr (for irrigation component) would be provided over five years from 2018-19 to 2022-23. This will be made through NABARD under existing system for funding of 99 PMKSY-AIBP projects under LTIF.
ii. This project would help minimising some of the water of the River Ravi which at present is going waste through the Madhopur Headworks downstream to Pakistan.
iii. Under the Project, the following has been stated:

Cabinet approved National Mission on Interdisciplinary Cyber-Physical Systems, worth Rs. 3660 crores, for 5 years
On December 6, 2018, the Union Cabinet chaired by Prime Minister Shri Narendra Modi approved the launch of National Mission on Interdisciplinary Cyber-Physical Systems (NM-ICPS), at a total outlay of Rs. 3660 crore for a period of 5 years.
i. It will be implemented by Department of Science &Technology.
ii. It is a comprehensive mission which would address the following:

iii. For the implementation of NM-ICPS, there would be establishment of:

iv. The Hubs & TTRPs would focus on 4 areas, namely

v. These Hubs & TTRPs will connect Academics, Industry, Central Ministries and State Government in developing solutions at reputed academic, R&D across the country.

Cabinet approved sale of the Government’s existing 52.63% of total equity shareholding in Rural Electrification Corporation to Power Finance Corporation along with transfer of management control
On December 6, 2018, the Union Cabinet chaired by Prime Minister Shri Narendra Modi approved the strategic sale of the Government of India’s existing 52.63% of total paid up equity shareholding in Rural Electrification Corporation (REC) to Power Finance Corporation (PFC) along with transfer of management control.
i. Both REC and PFC are Central Public Sector Enterprises under the Ministry of Power.
Ministry of Power & New and Renewable Energy:
♦ Minister of State (I/C): Shri. Raj Kumar Singh.