Bhubaneswar, Capital of Odisha became the First City in the Country to get ISO (International Organization for Standardization) 9001:2015 Certification for Faecal Sludge and Septage Management (FSSM) services.   Bhubaneswar Municipal Corporation (BMC) was the first civic body to implement FSSM regulations in Odisha.

Note – Jenaidah is the first city in the world to get ISO certification for FSSM. Bhubaneswar is 2nd in the world and 1st city in India in this regard.

ii.BMC partnered with Centre for Advocacy and Research (CFAR), a Non-Profit Organization for the purpose.

iii.For safe disposal and treatment of faecal sludge, the city has an efficient 75 KLD Septage Treatment Plant which has maintained the consistency of more than 100% utilization for last one year.

The National Policy on Faecal Sludge and Septage Management (FSSM) was launched by the Ministry of Urban Development in 2017. 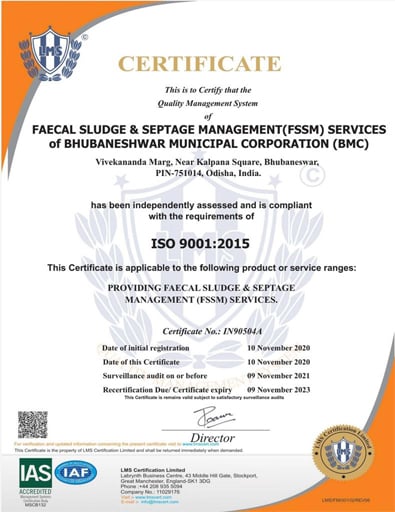 ii.It will be achieved through improving Onsite Sanitation Services to achieve optimum public health status and maintain a clean environment with special focus on the poor.

ii.Government of India may provide assistance for funding FSM projects as part of urban development schemes and programs.