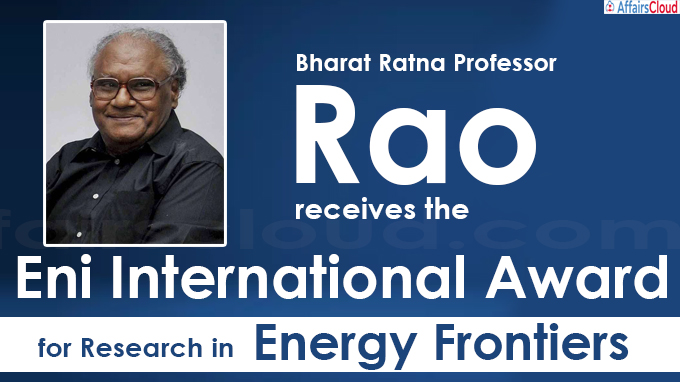 Bharat Ratna Professor Chintamani Nages Ramachandra Rao (C.N.R. Rao) has received the Energy Frontier Award 2020 for research into renewable energy sources and energy storage. The Energy Frontier Award 2020 is also known as the International Eni Awards 2020. It will be presented on 14th October 2021 at the official ceremony which will be held at the Quirinal Palace in Rome, Italy.

CNR Rao received the award for his work on metal oxides, carbon nanotubes and other materials and a 2-dimensional systems like graphene, boron-nitrogen-carbon hybrid materials, and molybdenum sulfide (Molybdenite – MoS2) for energy applications and green hydrogen production.

i.The Eni Awards was established in 2008.

On 17th February 2021, the Wildlife Crime Control Bureau (WCCB), under the Ministry of Environment, Forests and Climate Change (MoEF&CC), Government of India was selected as one of the winners of the 5th Asia Environmental Enforcement Award, 2020 by the United Nations Environment Programme(UNEP). WCCB has won the award under the Innovation category.