According to property consultant JLL report named ‘City Momentum Index 2016: The Rise of the Innovation-Oriented City’, Bengaluru is ranked first in the Asia Pacific region in terms of city’s socio-economic growth and momentum in the commercial real estate space. 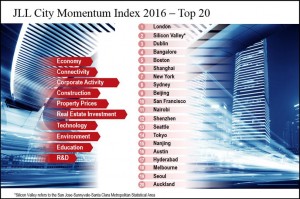 London, Silicon Valley Dublin, Bengaluru and Hyderabad is at 17th position in the global ranking.

With 40 per cent of India’s IT industry located in the city, the presence of international IT giants, together with the largest number of high-tech start-ups in comparison to any other Indian city.