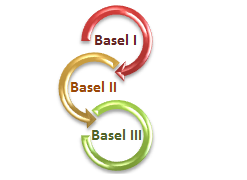 Basel I norms were published in 1988 which asked to set a minimum capital requirements for banks.  It defined capital requirement and structure of risk weights for banks. The goal was to minimize credit risk i.e. the defaults on a credit or loan when the borrower is unable to pay back to the bank.
The 1988 Accord called for a minimum capital ratio of capital to risk-weighted assets of 8% to be implemented by the end of 1992. Ultimately, this framework was introduced not only in member countries but also in virtually all other countries with active international banks. BASEL 1 focuses more on  Capital Adequacy Ratio (CAR) which is the ratio of a bank’s capital in relation to its risk weighted assets(RWA) and current liabilities.

Indian banks are required to maintain a minimum capital to RWA of 9%.

After Basel I, Basel II norms were published in 2004.
Unlike the goal of Basel I norms, Basel II focused on how much of the bank’s capital, bank must keep aside in order to reduce their credit risks. So in case if a bank is exposed to a greater risk, it needs to keep aside a greater capital to guard against the risks.
Basel II was to be implemented in early 2008. 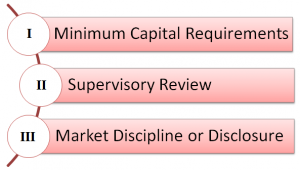 After Basel II, Basel III norms were published in 2010. They have been designed to address the shortcomings of Basel II after the 2008 financial crisis that the world faced.
In September 2010, the Group of Governors and Heads of Supervision announced higher global minimum capital standards for commercial banks.
According to Basel Committee, “Basel III” is a comprehensive set of reform measures, developed by the Basel Committee on Banking Supervision, to strengthen the regulation, supervision and risk management of the banking sector.

These measures aim to:

The three pillars of Basel Norms are unchanged in Basel III also.
Basel III was to be implemented until 31 March 2018 which is extended to 31 March 2019.
Basel III is not to be succeeded by Basel II, rather Basel III will work alongside Basel I and Basel II.