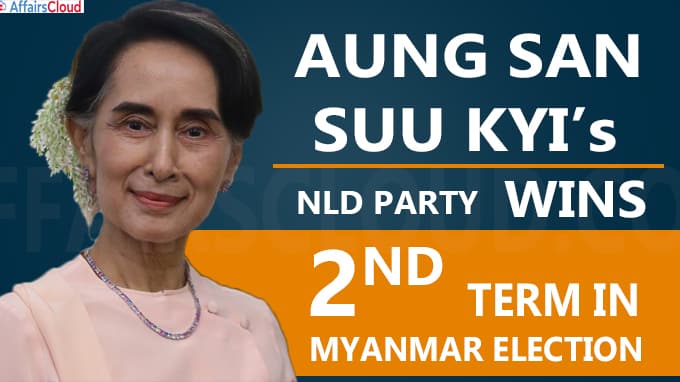 According to the Union Election Commission (UEC) of Myanmar, Aung San Suu Kyi’s National League for Democracy (NLD) is likely to win the 2020 Myanmar elections by securing 346 seats out of 664 seats in the Parliament (as on 13th November) which is enough to form the next government.

i.This will be the second term for Aung San Suu Kyi as State Counsellor and second victory for her party NLD.

ii.This is the Second Free elections in Myanmar, since the country emerged from Military rule in 2011.

i.The military-aligned opposition party Union Solidarity and Development Party (USDP) has won just 25 seats in the elections (as on November 13, 2020).

ii.NLD have secured more than 50% of the Parliament, even taking into account the seats reserved for Military under the constitution

ii.She played a vital role in Myanmar’s transition from Military Junta to Democracy.

iii.She was awarded the Nobel Peace Prize in 1991 for her non-violent struggle for democracy and human rights.

i.On October 1, 2020, the 19th round of Foreign Office Consultations (FOC) between India and Myanmar was held virtually to review the entire gamut of relations, including border cooperation and the ongoing restoration work on earthquake damaged pagodas in Bagan.