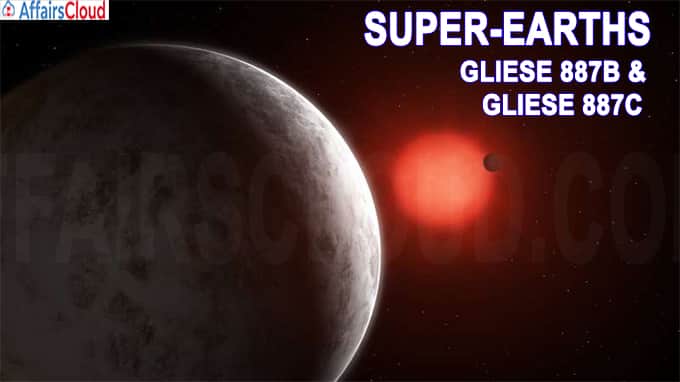 In the research of The RedDots team of Astronomers led by the University of Göttingen (Master – Georg-August-Universität Göttingen), Germany detected two super Earths Gliese 887b and Gliese 887c orbiting around the Gliese 887, the brightest red dwarf star in the sky. The results of the research are published in the journal Science.

Dr Sandra Jeffers,is the  lead author of the study from the University of Göttingen.

Gliese 887, the closest stars to the Sun which is around 11 Light years away from the Sun.

The team combined the data with the data from Anglo-Australian Planet Search (using the 3.9m Anglo-Australian Telescope), the Planet finder Spectrograph (on Cerro Las Campanas in Chile) and the HIRES instrument on the Keck telescopes on Maunakea, Hawaii.

Doppler Wobble is the technique used by the RedDots team, to measure the minute back and forth wobble (unsteady movements) of the star due to the gravitational pull of the planets.

The regular signals corresponding to the orbital period of 9.3 days and 21.8 days indicates the presence of two super Earths.

Findings of the research:

The discovered super earths are enormous than the Earth but substantially lesser than Uranus and Neptune.

The super earths are in the habitable zone of the red dwarf which could be a rocky world with water in liquid form.

The estimated temperature of the Gliese 887c is around 70 degree Celsius.

These planets provide best possibilities in the studies including the search of life outside the solar system.