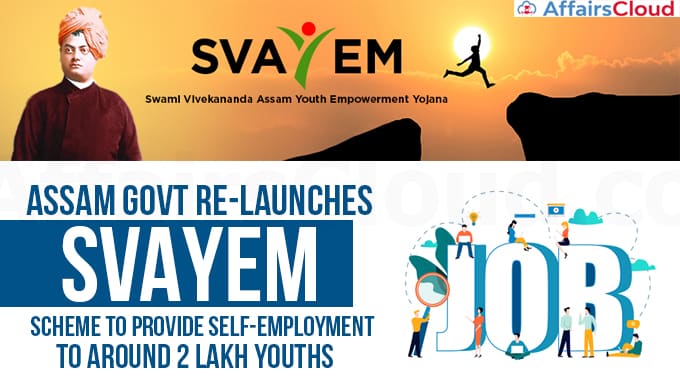 On 4th September 2020, The Government of Assam relaunched its old scheme Swami Vivekananda Assam Youth Empowerment (SVAYEM) worth Rs.1000 crore. The scheme is aimed to provide self-employment opportunities to more than 2 lakh youths of the state.

The Scheme was launched as a part of the budget in 2017-2018 to benefit around 1 lakh youths.Due to lack of support from the banks, the scheme benefited only around 7000 beneficiaries.

i.The redesigned SVAYEM with Rs. 10000 crore budget, which is generated by the revenue of the state without banking linkage is planned to be spent in the following three months.

ii.A new portal will be launched on 16th September 2020 to enable self-registration of the groups who seek to utilise the benefits of the scheme.

Redesigned SVAYEM will provide around Rs.50000 as a seed money to start a business venture to the qualified beneficiaries

Qualification: should have passed matriculation and be a part of existing self-help groups, joint liability group etc. before 1st September 2020.

i.The government relaunched a Abhinandan Education Loan Subsidy Scheme, that provides Rs.50000 subsidies to the people who have taken education loan will also be relaunched.

ii.Around 1545 people benefited through this scheme in 2019.

iii.The government has approved around 5547 applications and the amount will be released in october 2020 this will cost around Rs.25 crore for the exchequer.

i.the Assam state government’s health department has launched a special scheme called ‘Dhanwantari’, under which locally unavailable medicines will be delivered to patients at home.

ii.The government of Assam has decided to upgrade the 111.942 sq km Dehing Patkai Wildlife Sanctuary into a national park which is located within the larger Dehing Patkai Elephant Reserve, spreading across the coal- and oil-rich districts of Upper Assam (Dibrugarh, Tinsukia and Sivasagar).