On September 1,2017,Assam Government has extended term of Armed Forces Special Powers Act (AFSPA), 1958 and declared entire state a Disturbed Area for six more months under section 3 of AFSPA act.This is for first time state government has extended AFSPA and Disturbed Area provision on its own. In the past, AFSPA provisions in state were always extended by the centre.
A notification issued by the state home department said that while the law and order situation had continued to be a matter of concern due to violent incidents carried out by the underground groups, as many as 16 incidents involving these groups had taken place between May and July. These incidents had resulted in deaths of two civilians, one security personnel and four militants. The whole state was in unrest.

Why AFSPA act in Assam ?
Assam has remained a “disturbed area” under provisions of the AFSPA for nearly 27 years, with the Centre invoking the AFSPA on November 27, 1990, following incidents of violence by the ULFA(United Liberation Front of Asom),including the killing of industrialistsSurrendra Paul, younger brother of Lord Swarj Paul in May 1990. 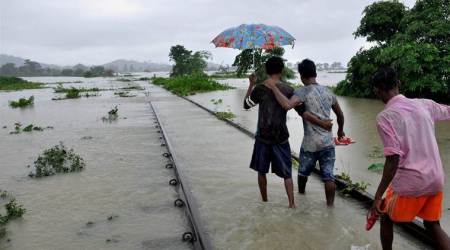 About AFSPA act : –
The Background:
The Armed Forces Special Powers Ordinance of 1942 was promulgated by the British on 15 August 1942 to suppress the Quit India Movement. Modelled on these lines, four ordinances were passed later it was invoked by the central government to deal with the internal security situation in the country in 1947 which aroused out of the Partition of India. Later it was incorporated into our constitution in 1958
The act : –
It empowers both state and central government to declare areas as ‘disturbed’ due to differences or disputes between members of different religious, racial, language or regional groups or castes or communities. The clauses in this act are
1) Failure of the administration and the local police to tackle local issues
2) Return of (central) security forces leads to return of miscreants/erosion of the “peace dividend”
3) The scale of unrest or instability in the state is too large for local forces to handle
The section (3) of the Act empowers governor of State/UT to issue an official notification in Gazette of India, following which Centre has authority to send in armed forces for civilian aid. Once declared ‘disturbed’, the region has to maintain status quo for a minimum of three months.

If an area that is proclaimed as “disturbed”, an officer of the armed forces has powers to: