Union Minister of Finance, Defence and Corporate Affairs, Arun Jaitley was on an official visit to South Korea from 14th -17th June 2017. During the course of this visit, Arun Jaitley participated in the India-Korea Financial Dialogue and the 2nd Annual Meeting of the Board of Governors of AIIB. 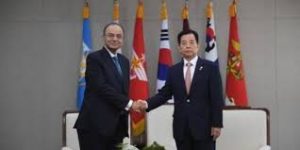 The second annual meeting of the Asia Infrastructure Investment Bank (AIIB) was held on June 16, 2017 in South Korea’s Jeju Island.

Other key events attended by Arun Jaitley during his visit to South Korea:

The Asian Infrastructure Investment Bank (AIIB) is a multilateral development bank that aims to support the building of infrastructure in the Asia-Pacific region.