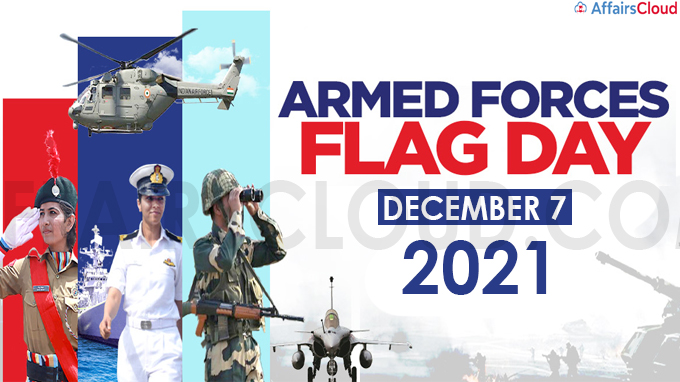 Armed Forces Flag Day is annually observed across India on 7th December to honour the martyrs and the armed force personnel who fought and continue to fight to protect the honour of the country.

i.On 28th August 1949, a committee set up under the then Defence Minister Baldev Singh decided to observe the Flag day annually on 7th December.

ii.The Armed Forces Flag day has been observed on 7th December since 1949.

i.The Kendriya Sainik Board Ministry of Defence raises the funds through the distribution of token flags, Booklets, and brochures, and collection of contributions by volunteers among the staff of the ministry to support the families of the martyrs, disabled former servicemen and their dependents.

ii.Flags in red, deep blue, and light blue signifying the three services (Indian Army, the Indian Air Force, and the Indian Navy) are distributed in exchange for the donation.

ii.AFFDF is operated by a Managing Committee, headed by Hon’ble Raksha Mantri at the Centre and Hon’ble Governor / Lt Governor at the State / UT level.

iv.The various welfare and rehabilitation schemes for Ex-Servicemen (ESM) and their dependents are formulated and operated by the KSB through the network of 32 Rajya Sainik Boards (RSBs) and 385 Zila Sainik Boards (ZSBs) co-located in the State Capitals and District headquarters across India.