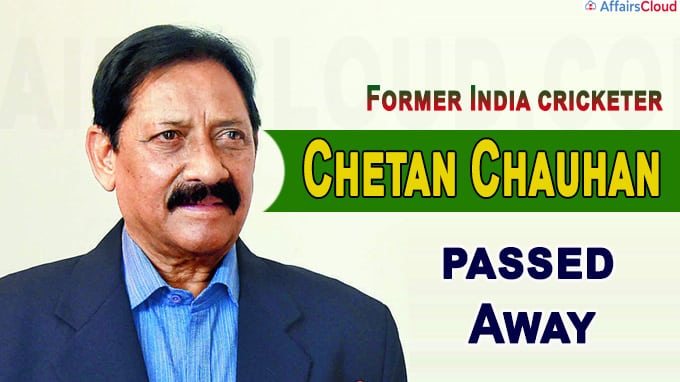 Former Indian cricketer and Uttar Pradesh (UP) Cabinet Minister of Sainik Welfare, Home Guards, Prantiya Rakshak Dal and Civil Security Chetan Chauhan(Full Name- Chetan Pratap Singh Chauhan) passed away at 73 in Medanta hospital, Gurugram, Haryana due to COVID-19. He belongs to Bharatiya Janata Party(BJP). He was honoured with the Arjuna award in 1981. He was born on July 21, 1947 in Bareilly, UP.

i.He made his 1st class debut in his 22 years against Mumbai and so, was known as a brave batsman of his generation. He also played Ranji Trophy for Maharashtra and Delhi.

ii.He made his test debut against New Zealand in 1969 and One Day International(ODI) debut against Ayub National Stadium,Quetta in 1978.

iv.Along with Sunil Gavaskar, he formed one of India’s best opening partnerships in Test cricket, where they averaged 53.75 runs for the opening wicket, the highest for an opening pair (minimum 1200 runs) in Indian cricket history.

v.He was also the first Test player to finish his career with over 2000 runs but without a century.

After retiring from Cricket, he contested and got elected twice(1991 &1998) as Lok Sabha Member of Parliament(MP) from Almorah in UP under a BJP ticket. In 2017 he won the assembly elections. He also served as the Sports Minister of the State.

i.Before entering into politics he served in the Delhi & Districts Cricket Association (DDCA) in various designations including president .

ii.He served as the manager of the Indian Team during its tour of Australia in 2001.

iii.He was appointed as the chairman of the National Institute of Fashion Technology in June 2016.

ii.Veteran Bollywood actor- comedian Jagdeep passed away at 81 in his Bandra residence, Mumbai. His real name is Syed Ishtiaq Ahmed Jafri. He is recognised for his role as Soorma Bhopali in the film “Sholay” and for his expression ‘khambha ukhadke’.