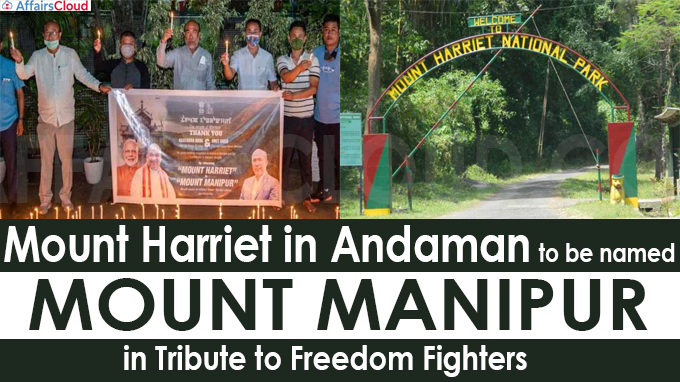 On October 16, 2021, Union Minister Amit Shah, Ministry of Cooperation inaugurated 14 projects worth Rs 299 crore and laid foundation stones of 12 projects worth Rs 643 crore from the Netaji Subhas Chandra Bose Island in Andaman and Nicobar Islands. With this, a development work of about Rs 1,000 crore is initiated in Andaman Islands.

ii.Initiation of new facility for heart patients, in which angioplasty can also be done and pacemakers can also be installed.

Manipur had a significant contribution to the independence movement, but the state never got their due recognition for the same. In order to acknowledge this, the Central Government has renamed Mount Harriet, an island peak in Andaman and Nicobar islands as Mount Manipur as a tribute to the freedom fighters of Manipur.

i.The Central Government will assist the Manipur government in constructing a memorial site at Mount Manipur. The process for signing lease agreement between Andaman Government and Manipur Government is under process.

ii.On August 13, 2021 Manipur unveiled a monolith dedicated to the unsung heroes of the Anglo-Manipur war in 1891.

iii.Manipur was the only state that had its own constitution before India adopted the present constitution in 1950. It established a democratic form of Government.

iv.Netaji Subhash Chandra Bose Island was earlier known as Ross Island. It was renamed in 2018 by Prime Minister Narendra Modi.

About Andaman and Nicobar Islands: