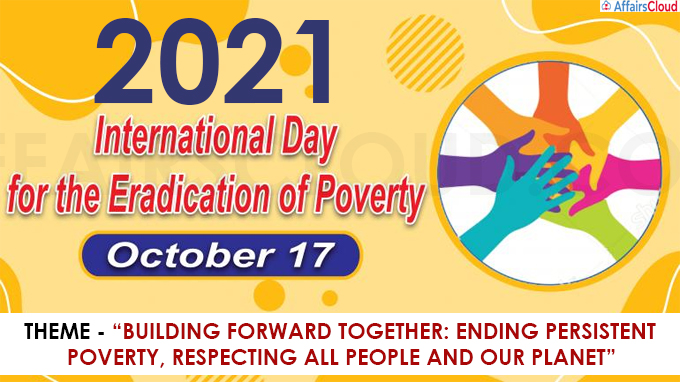 The United Nations (UN)’s International Day for the Eradication of Poverty is annually observed across the globe on October 17th to create awareness of the need to eradicate poverty and to ensure that the human rights of those living in poverty are not violated.

The theme of the 2021 International Day for the Eradication of Poverty is “Building Forward Together: Ending Persistent Poverty, Respecting all People and our Planet.”

i.The United Nations General Assembly (UNGA) adopted the resolution A/RES/47/196 on 22nd December 1992 and proclaimed October 17th of every year as the International Day for the Eradication of Poverty.

ii.The first ever UN’s International Day for the Eradication of Poverty was observed on 17th October 1993.

i.The World day of overcoming extreme poverty has been commemorated since 1987 when Joseph Wresinski, called for a gathering at the Plaza of Liberties and Human Rights in Paris, to affirm that: “Wherever men and women are condemned to live in extreme poverty, human rights are violated. To come together to ensure that these rights are respected is our solemn duty.”

ii.Since then, people of all backgrounds, beliefs, and social origins gathered on October 17th to renew their commitment and show their solidarity with the poor.

i.Poverty is a multidimensional phenomenon that encompasses a lack of both income and the basic capability to live with dignity.

ii.People living in poverty do not realise their rights and perpetuate their poverty.

ii.Around 50% of the new power will be in South Africa and more than one third will be in Sub-Saharan Africa.

iii.The number of people living under the international poverty lines in the lower and upper-middle-income countries is estimated to have increased the poverty rate by 2.3%.

United Nations Decade for the Eradication of Poverty: