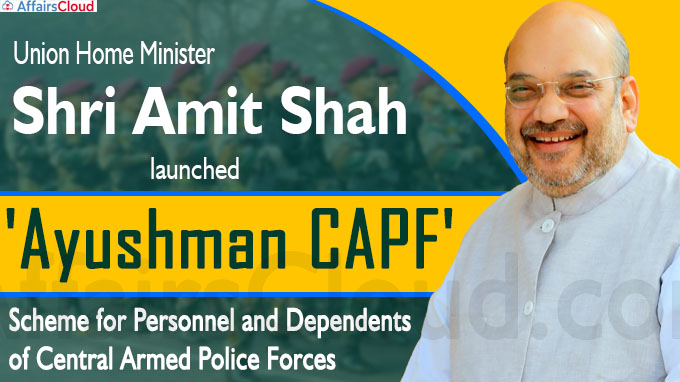 On January 23, 2021, Union Minister Amit Shah, Ministry of Home Affairs (MHA) attended a function in Guwahati, Assam where he launched the ‘Ayushman CAPF’ scheme for personnel and dependents of the Central Armed Police Forces (CAPF), which will be fully implemented by May 1, 2021.It will cover around 28 lakh personnel of CAPF, Assam Rifles and National Security Guard (NSG) and their families under ‘Ayushman Bharat: Pradhan Mantri Jan Arogya Yojana’ (AB PM-JAY).

This pan-India scheme is a first of its kind convergence between Ayushman Bharat and CAPF co-led by MHA and the National Health Authority (NHA) to provide cashless healthcare services to the serving CAPF personnel and their family members.

–The Prime Minister Ayushman scheme has already served around two crore people, and provides free treatment upto Rs. five lakh to the poor and the needy.

–Patients are also given Rs. 250 to commute back to their homes after treatment.

–The Government is also trying to ensure that every Jawan gets to spend at least 100 days every year with his family along with increasing the housing satisfaction ratio to 55%, which is targeted to be gradually increased to above 65% by 2024.