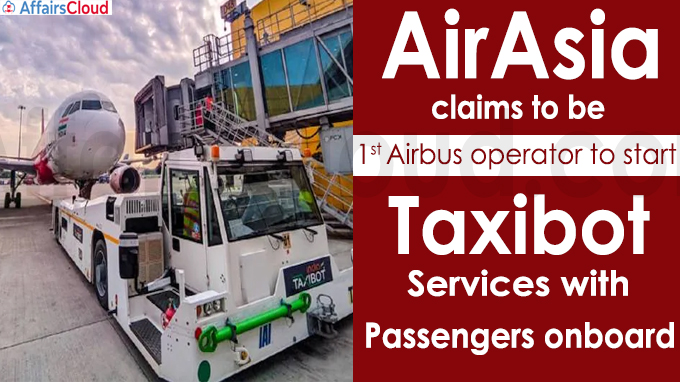 AirAsia India has become the first Airbus operator in the world to start Taxibot services with passengers on board with a modified Airbus fleet. It has announced the implementation of an Alternate Taxiing Solution (ATS), TaxiBot.

The airline has tied up with KSU Aviation, the exclusive operator of the TaxiBot in India.

i.Taxibot is considered as the green revolution in airplane taxiing, it will help in enhancing fuel efficiency and predictive maintenance and services.

iii.Taxibot reduces emissions and noise levels at airports, and the risk of foreign object and jet blast damage, and operates with a hybrid-electric engine.

i.The Taxibot is a semi-robotic towbarless aircraft movement device developed by Israel Aerospace Industries. It can tow an aircraft from the terminal gate to the take-off point (taxi-out phase) and return it to the gate after landing (taxi-in phase) without utilizing the aircraft engines.

ii.The TaxiBot eliminates the use of airplane engines during taxi-in and taxi-out, significantly reducing aircraft fuel usage, emission of CO2 and the risk of foreign object damage (FOD).