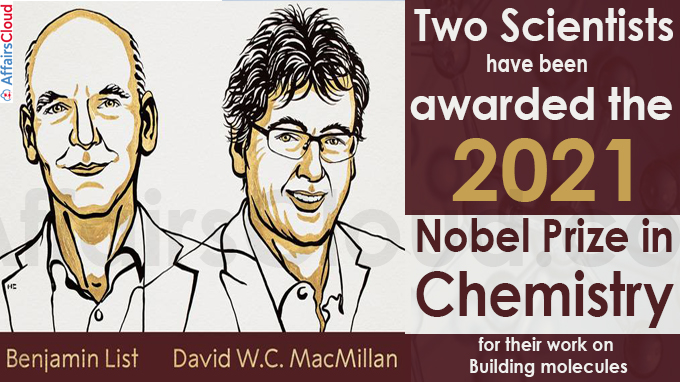 The Royal Swedish Academy of Sciences awarded the 2021 Nobel Prize in Chemistry to German chemist Benjamin List and British chemist David W.C. MacMillan for the development of a precise new and ingenious tool for molecular construction: asymmetric organocatalysis.

Benjamin List and David W.C. MacMillan independently discovered that organic molecules can be used as a catalyst, a tool to speed up the reactions.

i.Asymmetric organocatalysis is the third type of catalysis that builds upon small organic molecules.

ii.The development of asymmetric organocatalysis has made chemistry greener and made it easier to produce asymmetric molecules.

iii.This has a great impact on pharmaceutical research.

So far it was believed that there were only 2 types of catalysts available, which are metal and enzymes.

David W.C. MacMillan was born in 1968 in Bellshill, United Kingdom.

Nobel Prize in Chemistry 2020 was awarded to Emmanuelle Charpentier(Germany), Jennifer A. Doudna(USA) for the development of a method for genome editing. Genetic scissors: a tool for rewriting the code of life.

Facts on Nobel Prize in Chemistry:

ii.Marie Curie and Dorothy Crowfoot Hodgkin, are the women laureates who were awarded unshared chemistry prizes.

iii.Linus Pauling is the only person who has been awarded two unshared Nobel Prizes.