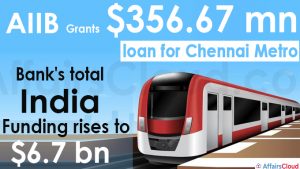 i.AIIB will invest in the phase 2 of the project that  involves construction of a new corridor in Chennai’s Metro Network.The project is aligned with AIIB’s mandate to support high-quality and sustainable infrastructure.

iii.The metro project will span from Lighthouse in the east to Poonamallee Bypass in the west to ensure seamless multimodal transport across Chennai by providing integrated access to suburban rail, bus stations and the city’s main airport.

iv.The station will be equipped with rooftop solar panels, which promotes green economic growth in the city. The project also integrates climate change resilience features to reduce its vulnerability to climate-related events.

i.India is the second largest shareholder with 7.5 % of voting rights after China with 26.06 % voting rights and also  its largest beneficiary in terms of getting approval for many projects.

ii.The energy and transport sectors received the highest amount of financing from AIIB

iii.The bank has approved loan assistance to 28 projects in India of USD 6.7 billion. AIIB has granted USD 1.75 billion as an aid assistance during the time of COVID-19 crises.