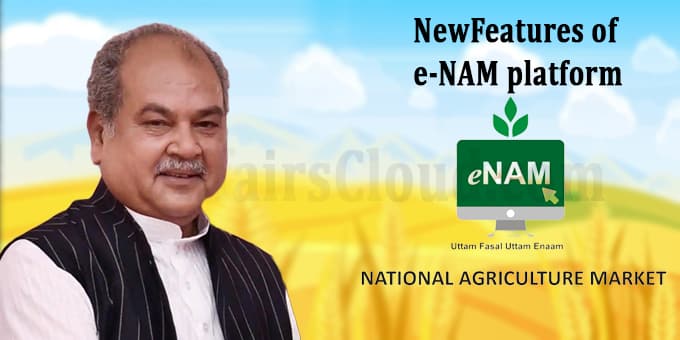 i.Negotiable Warehouse Receipt (e-NWRs) module– It will enable small & marginal farmers to directly trade their stored produce from selected Warehousing Development and Regulatory Authority (WDRA) accredited warehouses which are declared deemed market by the State. With this, farmers can sell the produce across India to get better Price and the hassle of mandi will also be avoided. Already States of Telangana (14 warehouses) & Andhra Pradesh (23 warehouses) declared designated warehouses in the State as deemed market.

ii.Farmer Producer Organisation (FPO) trading module– This will enable FPOs to upload the picture and quality parameters of the produce for bidding which will help distant bidders to visualise the produce before bidding. This feature will help FPOs in reducing the transaction costs (Transportation) for inter-mandi and inter-state trade.

iii.Logistic Module– This will promote inter-State trade under e-NAM by providing online transport facilities for distant buyers. For this purpose, 3,75,000 trucks from large logistic providers have been deployed.

About e-NAM
Started on 14 April 2016, a pan-India electronic trade portal linking Agricultural Produce Market Committees (APMCs) across the States. Simply, it is an online trading platform for agricultural commodities. Small Farmers Agribusiness Consortium (SFAC) is the lead agency for implementing eNAM under the aegis of Ministry of Agriculture and Farmers’ Welfare, Government of India.