Veteran Bollywood actress Rekha was honored with the third Yash Chopra Memorial Award in Mumbai. The award was presented by Maharashtra Governor C Vidyasagar Rao for her talent and contribution to the film industry. The award function has been organization by the TSR Foundation of T Subbarami Reddy in the memory of the producer-director. 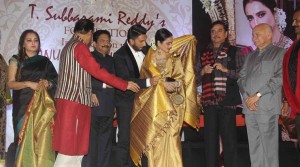