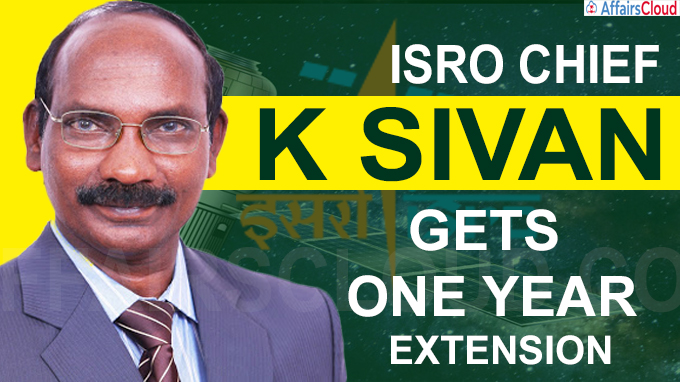 On December 30, 2020 The Appointments Committee of the Cabinet(ACC) approved a 1 year extension of Kailasavadivoo(K) Sivan, Secretary of Department of Space, Govt of India and Chairman of space commission from January 14, 2021, i.e. upto January 14, 2022 or until further orders, whichever is earlier.

iii.He has developed and implemented a ‘day-of-launch wind biasing strategy’. He was the chief mission architect for the successful launch of 104 satellites in a single mission of PSLV.

ii.He was the project director of Geosynchronous Satellite Launch Vehicle-GSLV(2011-2013).

On September 17, 2020 The Ministry of Corporate Affairs(MCA) extended the tenure of the 11-member Company Law Committee by one year, i.e., this committee constituted in September 2019 has been extended upto two years( 17.09.2021)from the date of the order to constitute the committee(18.09.2019). It is now chaired by Rajesh Verma, Secretary of MCA.