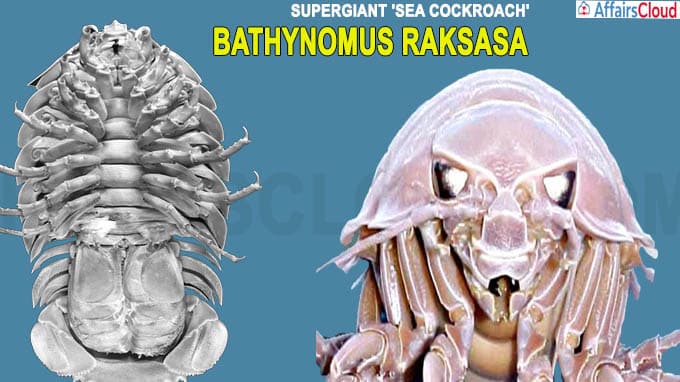 A team of researchers led by Peter Ng from Singapore confirmed the discovery of a new species called ‘Bathynomus raksasa’(Described as “cockroach of the sea”). The scientists reported their findings in the biodiversity research journal ‘ZooKeys’. The researchers found the new species in 2018 during a deep-sea survey off of the coast of Banten, Western Java, Indonesia(Indian Ocean).

i.The Bathynomus raksasa is a giant isopod in the genus Bathynomus.

ii.The giant isopods are related to crabs, lobsters, and shrimps (which belong to the order of decapods), and are found in the cold depths of the Pacific, Atlantic, and Indian Oceans.

Key facts of the species

i.It has 14 legs but uses these only to crawl along the bed of oceans in search of food. It usually d feeds on remains of other dead marine animals.

ii.It has an appearance of Darth Vader( a fictional character in the Star Wars) due to its shape of the cockroach’s head and compound eyes.

iii.It measures around 50 centimetres (1.6 feet) in length, which is big for isopods, which normally do not grow beyond 33 cm (just over a foot)  due to their low level of predation and cold conditions, as compared to other isopods.

iv.Isopods that reach 50 cm are referred to as supergiants. Like cockroaches, these giant isopods can also survive without food for days.

i.The research team is a group of 31-member, comprising researchers and support staff. The team was led by Peter Ng of the Lee Kong Chian Natural History Museum of the National University of Singapore (NUS).

ii.The project was conducted jointly by a NUS and Research Center for Oceanography (RCO) of the Indonesian Institute of Sciences (LIPI).

Note– In addition to this new species  researchers also discovered 12 other new species, which are unrecorded during the sea exploration which include, crabs, jellyfish, fish, molluscs, prawns, sponges, starfish, urchins, and worms.