As insisted by our Minister of Housing and Urban Poverty Alleviation Mr. M.Venkaiah Naidu, 500 cities and towns that account for the 65% of India’s urban population are to be credit rated by Atal Mission for Rejuvenation and Urban Transformation (AMRUT). Out of these 500 cities, 94 cities got its rating from AMRUT.

The ratings are provided on the basis of assets and liabilities of Urban Local Bodies and its revenue streams, resources available for capital investments, Double Entry Accounting practice and other governance practices.

Total of 20 ratings starting from AAA to D, these cities are rated on the above listed criteria.

The cities which got AA+ rating are NDMC, Navi Mumbai and Pune followed by Ahmadabad, Visakhapatnam and Hyderabad with AA rating.

About Atal Mission for Rejuvenation and Urban Transformation (AMRUT)

The scheme which is launched by Narendra Modi on 24 June 2015 works with an aim to improve the status of urban bodies by improving its infrastructure, adequate sewerage networks and water supply. 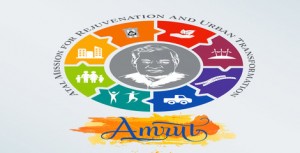 Cabinet approved AMRUT for Punjab and Uttarakhand for 2015-16