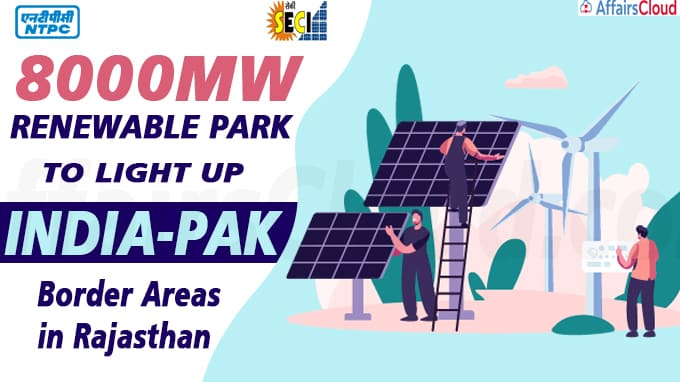 i.Rajasthan Renewable Energy Corporation Limited (RRECL) will sign a separate MoU with NTPC and SECI to materialise the Mega Power Park Project of the Government of India.

ii.Rajasthan shares over a 1000 Kilometre-long International border with Pakistan, which is supplied power through traditional methods.

iii.At present, an annual expenditure of INR 40 Crore will be incurred for supplying power to the border through traditional methods, Renewable energy will reduce the expenditure to one-third of the present cost.

i.Rajasthan Government approved a proposal for setting up of Solar Power Parks to generate 10, 000 MW Green Energy with an Investment of INR 50, 000 Crore.Five solar power parks will be set up in Jaisalmer, Bikaner, Jodhpur, Jalore, and Barmer.

ii.It has given a proposal to Adani Green Energy Limited to set up solar power parks at five locations and a solar panel manufacturing unit which will generate around 7, 500 direct and indirect jobs.

i.On 2nd August 2020, The Government of Rajasthan approved the 5% reservations to the More Backward Classes(MBC) in the state judicial service.