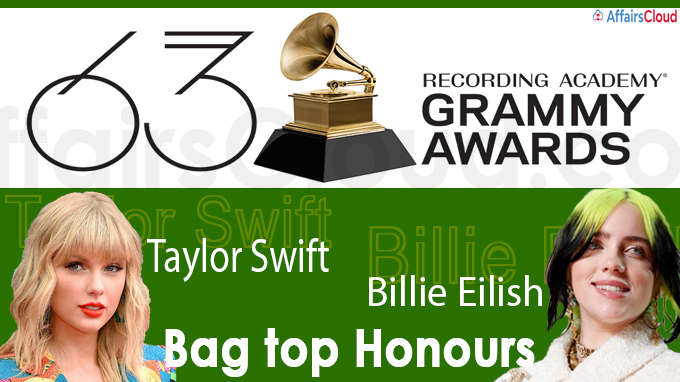 i.American Singer and Songwriter Taylor Swift won the award for the Best Album of the year for her album “Folklore”.

ii.American pop star, Billie Eilish O’Connell won the record of the year award for her song “Everything I Wanted”.

She also won the award for Best Song Written for Visual Media along with Finneas Baird O’Connell, for No Time To Die From No Time To Die.

iii.Beyonce won 4 awards and broke the record of most ever Grammy wins by female artists with 28 Grammys. She broke Alison Krauss’ record of 27 wins at Grammys.

With the best rap performance award for “Savage”, Rapper Megan Thee Stallion and Beyoncé became the first female duo to win the award.

They also won the award for the Best Rap Song for “Savage”.

The Grammy Awards are presented by the Recording Academy since 1958.

The award recognises and celebrates excellence in the music community.