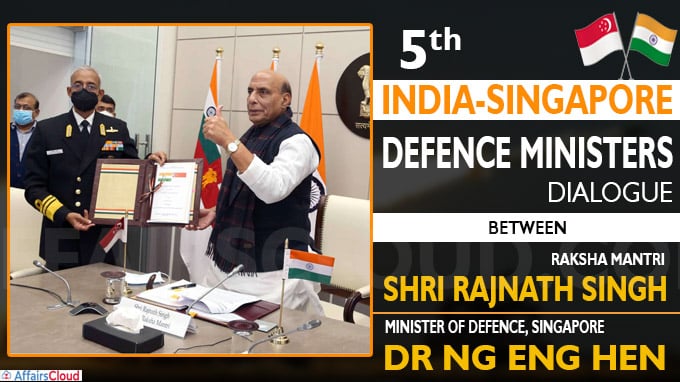 On January 20, 2021, the 5th India-Singapore Defence Ministers Dialogue 2021 held virtually between Union Minister Rajnath Singh, Ministry of Defence on behalf of India and Dr. Ng Eng Hen, Minister for Defence, on behalf of Singapore. It was also attended by Defence Secretary of India, Dr. Ajay Kumar.

The dialogue saw the signing of the Implementing Agreement on Submarine Rescue Support and Cooperation between the Indian Navy (IN) and Republic of Singapore Navy (RSN) under which both navies will extend rescue facilities to each other’s submarines in the times of distress with political permission.

–Both sides complimented each other for the implementation of measures to limit the spread of COVID-19.

–Discussions were held to explore new areas for potential cooperation.

–To further deepen the military cooperation, both Defence Ministers will support to facilitate the conduct of live firings and to establish cross-attendance of military courses.

–Both sides are also encouraging initiatives to expand bilateral defence cooperation including the implementing agreement on Humanitarian Assistance and Disaster Relief (HADR) cooperation signed in August 2020.

–The cyber agencies of both armed forces are also increasing their engagements.

–ASEAN (Association of Southeast Asian Nations) is playing an important role in regional security infrastructure. In this regard, India will support all efforts of the ASEAN Defence Ministers’ Meeting (ADMM)-Plus.

–On the other hand, Singapore will support India’s upcoming co-chairmanship of the ADMM-Plus Experts’ Working Group on HADR.

–Both sides are committed to promote peace and stability.

–In November 2020, INS and RSN conducted the 27th edition of Singapore-India Maritime Bilateral Exercise (SIMBEX) and also participated in the 2nd edition of the Singapore India-Thailand Maritime Exercise (SITMEX).

–As a part of bilateral agreements, Singapore is using Indian military facilities for training of its mechanized forces at Babina, artillery at the Deolali ranges in Maharashtra and F-16 fighter jets at the Kalaikunda air bases in West Bengal.

–There is also a naval pact between both nations to access each other’s bases and reciprocal logistics support for warships.

i.The Department for Promotion of Industry and Internal Trade( DPIIT)’s in its Foreign Direct Investment(FDI) data state that Singapore has invested Rs 62,084 crore(USD 8.30 billion) into India in April-September 2020, which makes it the biggest source of FDI into India.