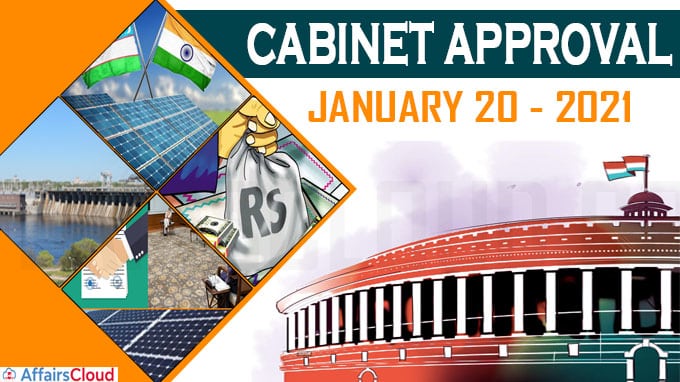 On January 20, 2021, the Union Cabinet chaired by Prime Minister Narendra Modi given its approval to the following approvals:

The Union Cabinet has given its approval to the new Joint Venture Company (JVC) for an investment of Rs.5281.94 crore in the 850 MW Ratle Hydro Electric (HE) Project. The project is located on river Chenab, in Kishtwar district of Union Territory (UT) of Jammu and Kashmir (J&K) and will be commissioned within 60 months.

–The equity contribution of JKSPDC worth Rs 776.44 crore in JVC for the project will be provided as grant from the Government of India (GoI) while NHPC’s will infuse equity share worth Rs 808.14 Crore from its internal resources.

–There would be free power in J&K worth Rs. 5289 crore during the project life cycle. It would be 1% in the 1st year after commissioning of the Project and rising @1% per year to 12% in the 12th year.

–The Union Territory (UT) will also be exempted from Water Usage Charges worth Rs.9581 crore for 10 years after commissioning of the project.

–A 540 MW Kwar Hydro Electric Project on river Chenab is also likely to be taken up shortly.

Cabinet Approval with Other Countries

The Union Cabinet approved the signing of Memorandum of Understanding (MoU) between India and Uzbekistan for cooperation in the Solar Energy sector.

–Both organizations will identify research/demonstration/pilot projects in the identified areas of Solar Photovoltaic, Storage Technologies, and Transfer of Technology.

–The will also work towards the implementation of pilot projects in International Solar Alliance (ISA) member countries.

Other Energy Agreements of India with different countries:

–In June 2020, India and Denmark had signed MoU on Indo-Denmark Energy Cooperation in the power sector.

— In January 2020, the Cabinet had approved the MoU between India and France on technical bilateral cooperation in new and renewable energy.

–In April 2019, India and Denmark signed a Cooperation Agreement in the field of Renewable Energy with a focus on Offshore Wind Energy.

i.On December 14, 2020, The First Trilateral Working Group (TWG) meeting was held virtually between India, Iran & Uzbekistan to discuss the joint use of Chabahar port in Iran to increase regional connectivity within the 3 countries. The Indian side was represented by Sanjeev Ranjan, Secretary (Shipping).

ii.On December 12, 2020, Export-Import Bank of India (Exim Bank), on behalf of the Government of India, has extended a Line of Credit (LOC) of $448 million to the Government of Republic of Uzbekistan for financing the latter’s various projects in the Roads & Transport, Water and Technology & Communication sectors.