The 47th Edition of the International Film Festival of India (IFFI), 2016 was held from 20-28 November, 2016 at Dr Shyama Prasad Mukherjee indoor stadium at Talegao on the outskirts of Panaji, Goa.

The ceremony ended with veteran filmmaker Subhash Ghai felicitating all the award winners and performers on the grand stage.

IFFI first to use Barco Laser Projection In India.

The 47th edition of International Film Festival of India used Barco’s laser projection for the first time in the country to offer superior image quality to the audience at the IFFI from November 20- November 28.

The 47th edition of the International Film Festival of India (IFFI) nominated 8 films for the ICFT UNESCO Gandhi Medal Prize. All 8 films were screened at the IFFI in Panaji, Goa. 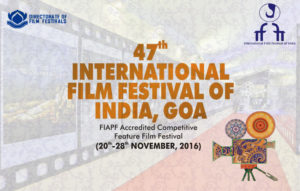 1.Harmonia from Israel,
2.Beluga from Iran,
3.Cold of Kalandar from Turkey/Hungary,
4.The Family from Spain/France/Germany,
5.Exiled from Latvia,
6.A Real Vermeer from Netherlands/Luxembourg/Belgium,
7.The Apology from Canada and
8.Allama from India.

The ICFT–Unesco Gandhi medal was awarded to Turkish film Cold of Kalandar, directed by Mustafa Kara for his poetic portrayal of rural life in a remote hilly region of Turkey. The film was chosen for its ethical values and respect for the environment.