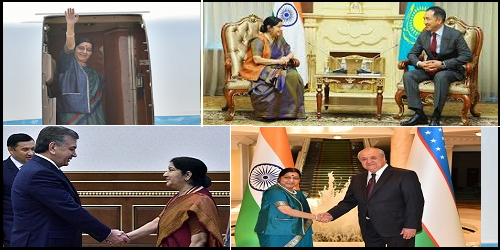 It is her first trip to these countries as External Affairs Minister.

2 day Visit of External Affairs Minister to Republic of Kazakhstan from August 2-3, 2018

The MEA minister announced her motto: “ Indian Embassy : Home away from Home” that addresses the NRIs 24×7.

A bilateral meeting with her Kazakhstani counterpart Kairat Abdrakhmanov

Sushma Swaraj congratulated the Kyrgyz Republic for taking over as Chair of SCO in 2018-19 and assured full cooperation in the successful conduct of meetings and the SCO Summit in 2019 to be held in Kyrgyzstan.

2day Visit of External Affairs Minister to Uzbekistan from August 4-5, 2018

Meeting with the Foreign Minister of the Republic of Uzbekistan, Mr. Abdulaziz Khafizovich Kamilov

Discussions on expansion of bilateral relations in parliamentary affairs, including the exchange of parliamentary delegations were held.

Invited him for his first visit to India which would be an opportunity for India and Uzbekistan to further strengthen bilateral relationship.