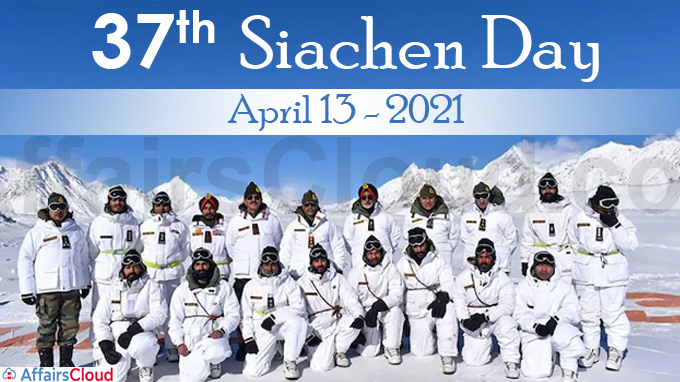 The Siachen Warriors celebrated the 37th Siachen Day on 13th April 2021 to honour the soldiers of the Indian army who continue to guard the Siachen Glacier, the northern frontier which is a part of the Union Territory of Ladakh.

i.On 13th April 1984, the troops of the Indian Army unfurled the national flag of India at Bilafond and launched the operation Meghdoot.

iii.13th April is annually observed as Siachen Day since 1984.

The operation Meghdoot was in support of the Indian Army and the paramilitary forces in the Northern Ladakh to secure the control in Siachen Glacier, which is referred to as the world’s third pole and the potential flashpoint on the dispute of Northern borders

i.Siachen Glacier is the highest, deadliest and costliest battlefield in the world.

ii.The Glacier is spread over an area of 76 kilometres.

iii.More than 850 Indian soldiers have lost their lives in Siachen since 1984 due to Climatic conditions.