The 2nd Meeting of Heads of Export Credit Agencies of BRICS (BRICS ECAs) was held at New Delhi , as part of a series of events being organised under the chairmanship of India of BRICS Forum.

BRICS is the acronym for an association of five major emerging national economies: Brazil, Russia, India, China and South Africa. Originally the first four were grouped as “BRIC” (or “the BRICs”), before the induction of South Africa in 2010.

An export credit agency or investment insurance agency is a private or quasi-governmental institution that acts as an intermediary between national governments and exporters to issue export financing.

The meeting was part of series of events being organised under the Chairmanship of India of BRICS Forum. It was organized parallel with meetings of BRICS Trade Ministers. The meeting was hosted by ECGC Limited, a premier Export Credit Agency of India. 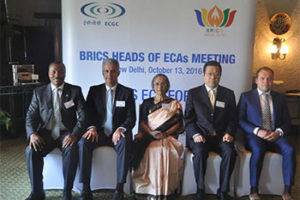