On January 20, 2020 The 23rd edition of the PwC’s Annual Global CEO Survey was launched on the 1st day of the World Economic Forum (WEF) annual meeting in Davos, Switzerland. As per the survey based on the confidence of CEOs over worldwide economic growth, India ranked 4th while it was topped by United States(US). China and Germany ranked 2nd and 3rd respectively. The survey report in detail are as follows: 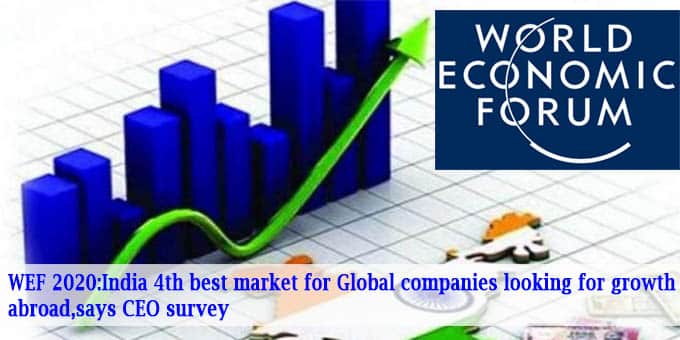 i.Only 9% in the global survey favour India for their companies’ growth prospects.

i.Top market CEOs: The US remains as lead in top market CEOs over the next 12 months at 30%, just one point ahead of China as China was at 29%. Apart from the US and China the other countries making the top 5 places for growth are Germany (13 per cent), India (9 per cent) and the UK (9 per cent) in 3rd, 4th and 5th place respectively.

v.CEO opinion on GDP: The survey covered 1600 CEOs in 83 territories showed that 53% of CEOs believe that the global GDP (Gross Domestic Product) would reduce/decline. This estimation is up by 29% from 2019.  Only 22% of the CEOs expected improvement in global GDP.

vi.There were 4 key forces that drives the upskilling imperative. They are

About PwC:
Fact- PwC are leading professional services networks in the world. They help organisations and individuals delivering quality in assurance, tax and advisory services.