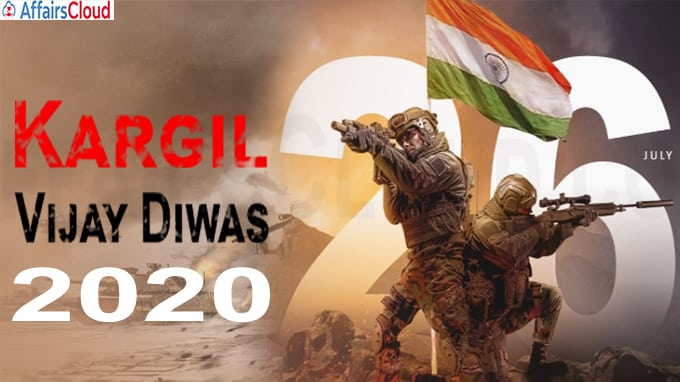 26th July 2020 is celebrated as the 21st Kargil Vijay Diwas which marks the 21st anniversary of India’s victory against Pakistan under Operation Vijay, launched to recapture the Indian Territories captured by the Intruders of Pakistani army in the Kargil Drass sector in 1999.

26th July of every year is observed as the Kargil Vijay Diwas in the honoured memory of the soldiers who sacrificed their lives in the 1999 Kargil war which took place from 3rd May to 26th July at Kargil, Kashmir and along the Line of control(LoC).

i.As a part of the Operation Vijay Indian Army evicted the Pakistani intruders from Tiger hill and other posts.

ii.More than 500 officers, soldiers and jawans of Indian army lost their lives in the 3 months conflict.

i.Amit Shah, Union Home Minister paid tributes to the martyrs and stated that Kargil Vijay Diwas as the symbol of India’s self-respect, bravery and leadership.

ii.The armed force and the civilians paid tribute to the Indian Army in the Union Territories of Jammu Kashmir and Ladakh.

iii.Floral tributes were paid to the soldiers at the war memorials across the nations.