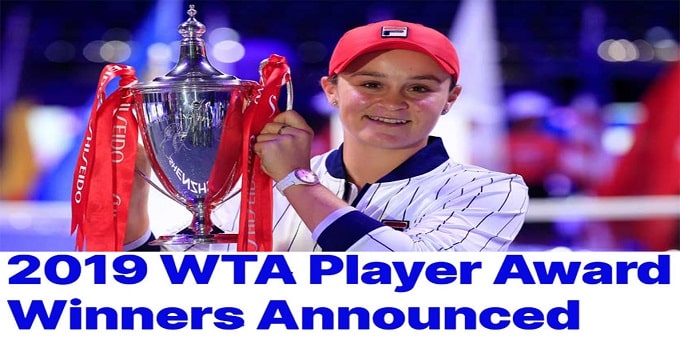 i.Ashleigh Barty, Australia was bestowed with the 2019 WTA Player of the year award with 82% vote, she became the first Australian to be named WTA No.1 since Evonne Goolagong Cawley in 1976. She has recorded 57 matches, the most matches won in the 2019 tour, and won 4 titles from 6 finals. She advanced to the quarter finals at the Australian open and the round 16 of Wimbledon and U.S open becoming the 1st player to reach the 2nd week at all four Grand Slams in 2019.

ii.Bianca Andreescu, Canada won 2019 WTA Newcomer of the year award with 67% vote. She became the WTA world No.5 after defeating Serena Williams at the finals held in New York, accounting to this she became the first Canadian player male/female to lift this Prestigious title. She has played only 13 tournaments this season because of an injury.

iii. Sofia Kenin, United States (US) won 2019 WTA Most Improved Player of the year award with 39% vote, the award is given to players in the top 50 who show improved results throughout the year. She is now the World No.14 by moving forward from the 56th place at the beginning of the year, she reached the 1st four tour finals with a win in Hobart, and titles from matches held in Mallorca and Guangzhou and defeating Belinda Bencic in the finals held in Spain.

iv.Timea Babos and Kristina Mladenovic, from Hungary and France, won the 2019 WTA Doubles Team of the year with 44% vote. The doubles team had an extraordinary year with a win in the major events held in Roland Garros, reaching the finals in the Australian Open and playing in the Wimbledon and United States (US) open. They also won the doubles title at the Shiseido WTA finals in Shenzhen.

v.Belinda Bencic, Switzerland won the 2019 WTA Comeback Player of the Year award with 80% vote, she The player struggled after a wrist surgery in the year 2016 that pushed her out of the top 300, she has regained her position in the year 2019 as the WTA World No.8, after her first grand semifinal, and success in Dubai and Moscow with a score of 49 wins in the WTA tour 2019.