On November 27, 2019 the 2019 Global Diplomacy Index was launched by Sydney(Australia) based Lowy Institute. The index was about the statistics, marking how the world’s diplomatic networks are expanding and shrinking. As per the index, India ranked at 12th position among 63 countries for having diplomatic posts across the world. The list was topped by China. 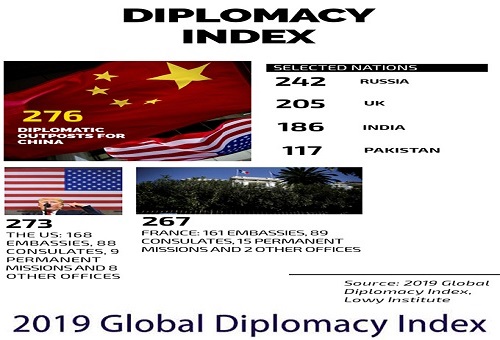 i.China overtook the United States(US) in 2019 with 276 embassies and consulates worldwide, which is three more than the US. Thus US was ranked second in the list followed by France, Japan, and Russia in the 3rd,4th and 5th place respectively.

iv.The US is home to some 342 posts belonging to the 61 countries included in the Index. China, with 256, is a distant second,” Bonnie Bley, the Lowy Institute research fellow who compiled the list, wrote.