The National Bravery Awards 2016 has been conferred upon 25 children that include 13 boys and 12 girls. Among the 25 awards, four awards have been given posthumously. 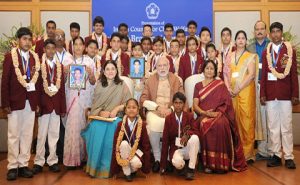 The selection of the children is made by a high powered committee that contains representatives of various Ministries/Departments, non-governmental organisations as well as office bearers of Indian Council for Child Welfare (ICCW).

2.Geeta Chopra Award Winners: Tejasweeta Pradhan and Shivani Gond
The prestigious Geeta Chopra Award has been conferred on 18-year-old Tejasweeta Pradhan and 17-year-old Shivani Gond both from West Bengal. They both showed immense courage to fearlessly help the police and the NGO in disclosing an International sex racket leading to the arrest of the mastermind in Delhi.

iii.Master Tushar Verma
Fifteen-year-old Master Tushar Verma of Chhattisgarh has also been named for Bapu Gaidhani Award for risking his own life to extinguish fire in his neighbor’s shed and saved many cattle

About the National Bravery Awards
i. The National Bravery Awards, instituted in 1957, are a set of awards given by the Government of India and the Indian Council for Child Welfare (ICCW) to children who were between the ages of six to eighteen when they committed their acts of bravery.
ii. The award includes a medal, a certificate, and a cash prize. The Bharat Award winner gets a gold medal, while the rest get a silver medal.
iii. Each child is also given financial assistance by ICCW until they complete their schooling. Some state governments also provide financial assistance to them. Besides, ICCW provides financial assistance under its Indira Gandhi Scholarship Scheme to those undertaking professional courses such as engineering and medicine. Others are provided this assistance till they complete their graduation.
iv. The Government of India has reserved some seats for the awardees in medical and engineering colleges and polytechnics since 2009.
v. Since the inception of the scheme in 1957, the ICCW has given awards to 945 brave children, which include 669 boys and 276 girls