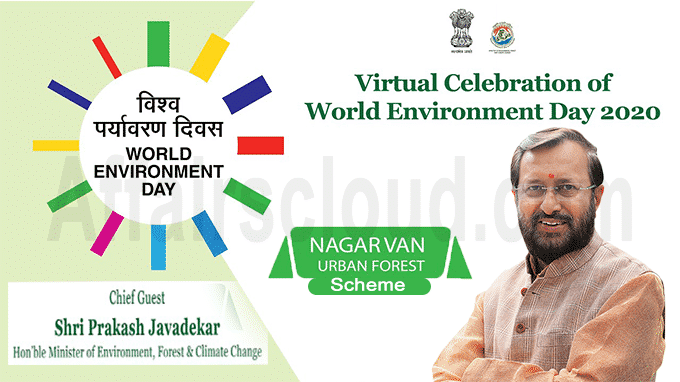 “Nagar Van” (Urban forest) Scheme launched virtually by the Central Govt. on June 5, the occasion of the World Environment Day 2020 (WED) announcing the implementation to develop urban forests across the country over the span of 5 years.

Stressing on the substance theme of “Biodiversity” by the United Nation’s Environment Programme (UNEP), The Ministry of Environment, Forest and Climate Change celebrated the day by announcing the initiative of urban forests in India. Urban forest are seemingly the best way to bridge the gap of climate change.

Events during the day:

i.A film on how the initiatives of Punaikars along with Forest Department and local body converted 16.8 ha(hectare) of a barren hill into lush green forests was played.

ii.The launch of the scheme was also noted with a brochure release on the best practices on Urban Forests.

Statements by Environment Minister, Prakash Javadekar on the launch of the scheme to give “Time for Nature”.

Note : The thumb rule according to him is if we protect nature, nature would protect us.

i.India houses about 8% of the world’s biodiversity, with only 4% of freshwater sources. The sustained biodiversity is due to the culture of the country being in sync with the nature, where animals, birds and trees are worshipped and respected in the society.

ii.Even with only 2.5% of the global landmass cover, the biodiversity in India supports numerous species of plants and animals and sustains 16% of the human and cattle population.

Note : This Urban Forest Initiative would succeed as a Joint effort and collaboration of the Forest Department, Municipal bodies, NGOs, Corporates and local citizens.