On May 1, 2020 The Union Minister of Agriculture and Farmers Welfare, Narendra Singh Tomar has added 200 new mandis to the e-National Agriculture Market(e-NAM) platform from 7 States & stated that by May 2020 there will be around 1,000 Mandis joining the e-NAM platform for marketing of Agricultural produce at a function in Krishi Bhawan through video conference. 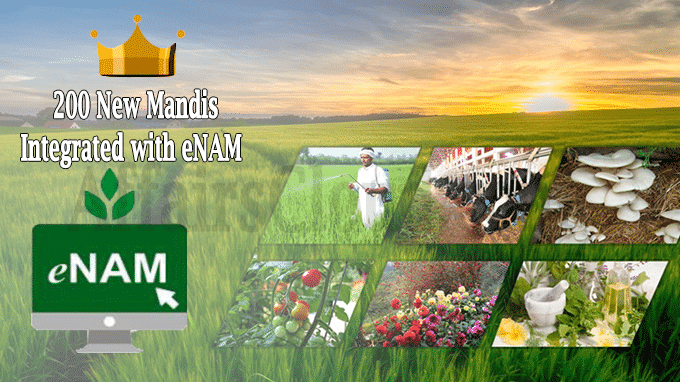 i.Live trading between mandis from Kurnool and Hubli in groundnuts and maize  took place

iii.Currently there are 585 e-NAM mandis in 16 States and 02 Union Territories on adding the new mandis it will come to the total of 785.

iv.It is the 1st milestone achieved in the path of integrating 415 new markets across the country & is  the 1st time Karnataka is added to the list of e-NAM States.

v.It has gained more strength by reaching out to more farmers & traders of these new mandis, aiming to reach the last mile farmer and change the way they sell agricultural produce.

For the 1st time in India 2 different e-trading platforms e-NAM & Unified Market Platform(UMP) of Karnataka’s Rashtriya e-Market Services (ReMS), an e-trading platform promoted by the Karnataka State Agriculture Marketing Board for Agri commodities of the scale will be made interoperable

Few launches by the ministry to tackle COVID-19:

i.2 modules: FPO module- To help the farmer members of FPO to trade from their collection center; Warehouse module- farmers can sell their stored produce in Warehousing Development and Regulatory Authority(WDRA) registered warehouses,  which are declared as deemed mandi by States.

ii.“Kisan Rath” mobile app to help farmers to find suitable transport vehicles/tractors to carry their produce to nearby mandi and warehouse etc.