South Asia Regional Initiative for Energy Integration (SARI/EI) and US AID (United States Agency for International Development) organized the Two Days Conference on Enhancing Energy Cooperation in the Bay of Bengal Initiative for Multi-Sectoral Technical and Economic Cooperation (BIMSTEC) region held at Bangladesh capital Dhaka between February 25-26, 2020. During the conference they released the report “prospect of regional energy cooperation and cross-border energy trade in the BIMSTEC region”. 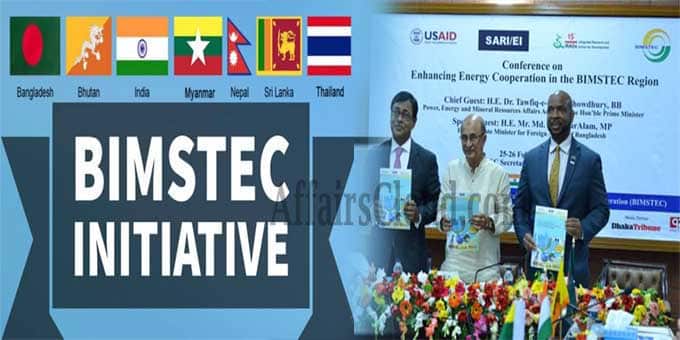 India has 98% of coal resources & tops in all energy resources among BIMSTEC region-“prospect of regional energy cooperation and cross-border energy trade in the BIMSTEC region” report:

iii.According to the Report Bangladesh ranks 2nd  in the coal resources by having 3300 MT followed by Thailand, with 1063 MT of coal.

ii.And the power grid will also benefit for the consumers to get uninterrupted power supply and the price of the electricity will become low.

iii.BIMSTEC countries had signed a Memorandum of Understanding (MoU) for establishing a regional power grid during the 4th BIMSTEC summit held at Kathmandu, Nepal in 2018 and the MoU came into force from 2019.